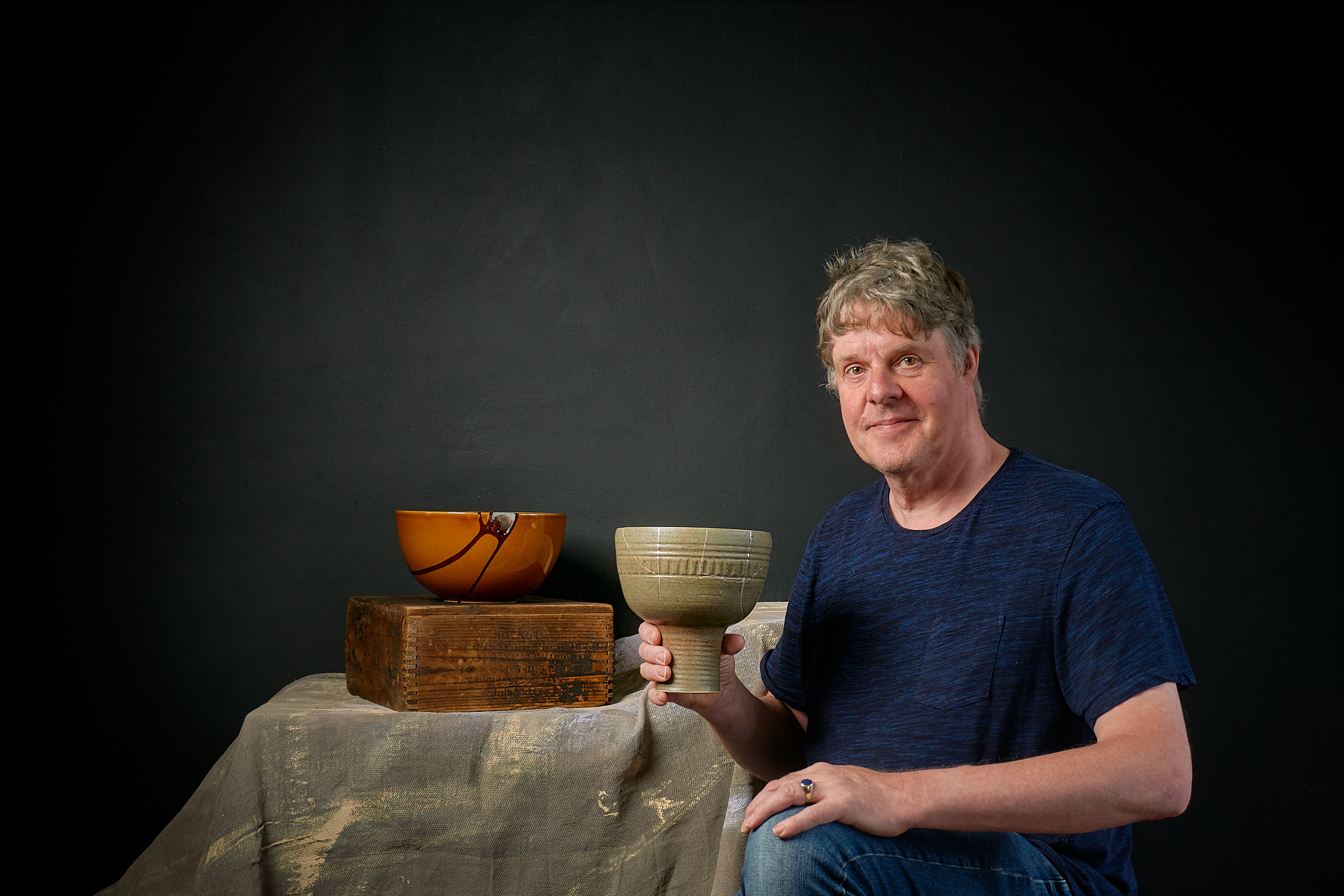 Today in the Fourtwographs studio Ted and Chimp had a visit from Kintsugi Wabi Sabi. Unsure how to pronounce his name they referred to him as ‘Chris’. Chris was here to have his website picture updated. After a brief discussion, over coffee, the shooting commenced. The backdrop was our black wall, in front of which was placed a ladder and a stack of suitcases, all of which were covered with a painted canvas. Some of Chris’s beautiful pottery was placed on top. A stool set off to the right for Chris to sit on, whilst holding another piece of his work. John shot with his usual one light and the reflector, expertly managed by Ted this was used towards the end to add a little extra light. John took 20 pictures, 2 were selected for use.The whole session lasted for about an hour. Ted and Chimp are having a well earned rest after holding the reflector for John during the shoot.

Kintsugi is an ancient Japanese art. They believed that rather than throw out a broken piece of pottery it could be restored and made more beautiful than before. This is done using precious metals such as gold, silver and platinum to repair the damage, be it a crack or a missing section.

For those of you who would like to know more about Kintsugi, what it is and what Chris does follow the link below.

You may recall last year - almost 12 month to be honest - a wonderful gentleman and his dogs approached me to create a great family portrait of him and his dogs. SEE HERE Well today I write of his passing. Malcolm Samuel Firth 1938 - 2014 One of best men I ever walk a...
Read More

What a great and unusual request   We are often asked about or Pet Portraits here at fourTwographs. The other week we was asked if we would be interested in photographing a couple of snakes...
Read More

What to wear for a portrait. My advice and many other photographers - but not all - would be to wear what you completely feel comfortable in. If you feel comfortable then the chances are we will get a great shot. The logic is, if you're happy...
Read More

Am I right for the job?

Professional photographer. Choosing the right one to work with you Ideally you should be making your choice of photographer based on the style of images you want to hang in your home. Fine art, Life style, Fashion, high key, Low key, Black...
Read More

Cat Portrait Today was not the best of days freedom wise. You see, it turned out that my human - Laura - had arranged for a gentleman by the name of John Bentley to come and photograph my...
Read More

What to wear for a shoot

A common question asked when people are booking a family portrait with us at fourTwographs Fine Art Studio During our family portraits you can bring a change of clothes and colours, we are happy to discuss this with you before your day. Below we have come up with a...
Read More

On Thursday 6th July, the first half of the Project 22 exhibition went on display to the public in The Gallery at St. Georges House as part of the Manifest Arts Festival. Over 14 hours, John and exhibition curator Emma displayed 270 images, with 211 hung...
Read More

Below are a small collection of images taken by myself John Bentley, of the late GREAT Malcolm Samuel Firth who on the 24th April 2014 decided he needed to take a long rest in preparation for the afterlife. If anyone out there is wanting to have a pictorial memory of...
Read More

Last month you may recall I had a photoshoot with a wise gentleman and his three dogs. Mal, Sam, Brett and Molly. Well yesterday Mal came into the studios to collect the purchased fine art prints from that shoot. He was absolutely over the moon with the shoot and...
Read More

Three boys and a box of raisins

Quick early shoot Saturday  morning with these handsome young boys These three were brilliant sitters. Nominated for a photoshoot by their Grandmother from a facebook request I had put out there on my page - clicking the image will take you there - looking...
Read More